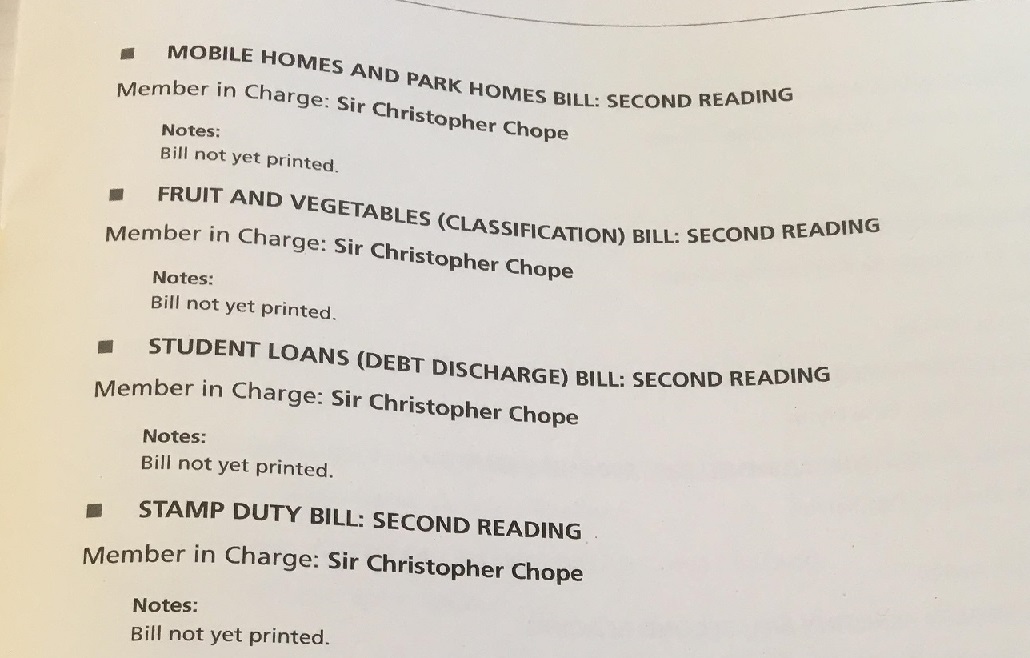 If you were one of those left scratching your head on Friday as criticism swelled across social media that a Private Members’ Bill on upskirting had all but been killed off by a rambunctious Tory dinosaur, don’t worry, you weren’t alone.

Very few people outside the Westminster bubble are aware that Private Members’ Bills even exist, let alone understand what they do or how they work. That is perfectly reasonable given their relatively slim odds of ever making it on to the statute book, thanks, in no small part, to Mr Chope et al., but it is a cause for concern nonetheless. Surely as participants in a developed democracy we should understand how our laws are made?

The brouhaha that followed Chope’s shout of ‘Objection!’ on Friday afternoon will have been, for many, their first contact with the arcane legislative process that dictates how PMBs progress through the House. Unsurprisingly, a great number of people have been left feeling angry.

Friday was not a good advertisement of MPs, the Commons, or some of the more archaic, incomprehensible mechanics of Parliament, which hardly encourage the perception that modern, effective policy making is being witnessed in action.

It will also undoubtedly be a thorn in the side of the Tory Party for months to come. This is precisely the image CCHQ was trying to dispel – that it is a Party full of Chris Chopes. The very public distancing exercise that was conducted en masse on Friday afternoon shows just how worried many of his colleagues are that efforts to revamp the Tory brand will be foiled by these Thatcherite stalwarts of the old days, sometimes quite unwittingly. The degree to which they are out of touch with modern Britain does damage enough.

Like that great uncle that embarrasses his relatives by always causing a row at Christmas, you can put money on Chope making waves every PMB Friday. For his colleagues, he forms part of that embarrassing branch of the Tory family no one wants ordinary voters to come into contact with.

And that’s the real travesty – the inevitability of this whole sorry saga. Chope is a serial and experienced saboteur, and everyone knows it.

From pardoning Alan Turing to banning revenge evictions, ending the use of wild animals in circuses to providing free hospital parking for carers, you name it, right on cue, Sir Chris Chope has opposed it.

Is it for some lofty, albeit misguided, principle, you might ask? No. It’s based on the warped notion that the Government is infringing on time allotted to backbenchers, presumably as part of a brazen attempt to piggyback on legislation it suspects will prove popular with the electorate. His opposition ultimately boils down to a longstanding temper tantrum with the executive.

Even more frustrating, this is all entirely avoidable through some not so seismic internal reforms. Of course, every Bill that passes through Parliament must be subject to robust scrutiny, and nothing should be exempt from fair criticism. But the current process is broken.

PMBs offer backbench MPs an unrivalled opportunity to leave their mark on Parliament, and for perhaps the only time during their tenure in Westminster, genuinely influence legislation. Those that receive cross-party support can do great good, catching the Government’s attention and acting as a catalyst for change. Just look at Bob Blackman’s Homelessness Reduction Act last year.

But for one MP to be able to effectively consign legislation to the trash heap without a single word being spoken, for or against it, is a disgrace. Chope and his band of awkward miscreants have acted as judge, jury and executioner for time immemorial, and the Government hasn’t batted an eyelid.

Many calls for reform have been made, only to be subsequently and routinely rejected. In 2016, Parliament’s Procedure Committee recommended a raft of possible improvements to the system, all of which would have created greater fairness, strengthened transparency, and maintained the important executive/backbench balance. Were any of these diligently acted upon by the then Leader of the House, Chris Grayling? Other than a few very minor, tokenistic alternations, of course not.

The whole point of PMBs is to allow backbench Members, rather than the Government of the day, to initiate legislation that enjoys widespread support from across the House. However, as it is, Fridays are little more than a merry-go-round of debate, deliberation and disappointment. No wonder so many MPs don’t bother to turn up.

The Government must grasp the nettle. Whilst it might not be a high priority in the grand scheme of things, voters have now been made aware of this phony process and will expect change. Besides, ministers could do with the sort of good news stories that will come about with more positive, popular legislation being passed. The time for reform is now.